I am not a regular watcher of All Elite Wrestling, but I am definitely familiar with it. I knew AEW was gaining popularity, but it was never more obvious than at C2E2 earlier this year.
I was in the first wave of people who got into C2E2 on Friday, but such a good portion of that crowd immediately went to the AEW line. By the time I got there, the line wrapped all around the convention area and I knew I had no chance at the first few AEW stars. That line never really let up. Different wrestlers switched in and out of the booth,l but the line remained one of the longest at C2E2.
Finally on Sunday, when the convention was winding down, I found myself pretty much done with all of my work and with time on my hands. The AEW line wasn't horribly long by now. I jumped in without even knowing which stars I would meet.
To my surprise, MJF and Wardlow were the first two AEW stars I met. They stayed in character, especially MJF, who scowled at me.
MJF received some criticism for how he handled some young fans. I'm a bit split on this issue. On one hand, if the kids watch wrestling, they would know his character and also would have seen plenty of harsh things on television. If the kids wouldn't know better, their parents should have. It shouldn't have been a shock.
On the other hand, I don't exactly know what MJF did to incur the wrath. Perhaps he could have stayed in character, but lightened up a bit around the kids? It's a tough call.
I once had a knucklehead "bad guy" wrestler tell me he doesn't have 8x10's because he is a bad guy. I believe the history of wrestling proves you can be both a bad guy and a popular wrestler. In fact, especially in more modern wrestling, bad guys often are more popular and are almost forced to become good guys because they get cheered so loudly.
If nothing else, I applaud MJF for trying to keep the mystery of wrestling alive. In wrestling terms, he is keeping kayfabe and that's not a bad thing.
Go to C2E2.com for more info and hope to see you there in 2021. Also check out MJF, Wardlow and all the others at AllEliteWrestling.com. 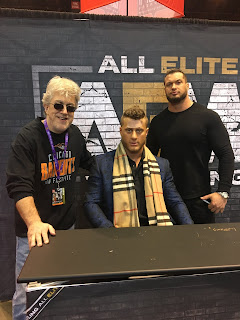