Cards That Never Were is a recurring series in which I create virtual trading cards for players missed in various sets.  It is a concept I have borrowed from far to many to list, but I appreciate all of them.
Bob Love was selected by the Cincinnati Royals in the 4th round of the 1965 NBA Draft.  After a season in the Eastern Basketball League, Love made his NBA debut in the 1966-67 season.  Prior to the 1968-69 season, the Milwaukee Bucks picked Love in the Expansion Draft, but traded him to the Chicago Bulls halfway through that season.
"Butterbean" flourished in Chicago, making 3 All-Star teams and averaging 21.3 points per game.  He also was tied for most games played in a season three times.
Midway through the 1976-77 season, the Bulls traded Love to the Knicks.  After 13 games with the Knicks, he was claimed off of waivers by the Seattle Supersonics.  He played 32 games with Seattle, averaging 4.1 points per game, before retiring at the end of the season.
Topps saw fit to give Love cards in their sets from 1969-70 (their first year of producing basketball cards) through 1976-77.  As odd as it is to see a picture of Love in the green of the Sonics, I made a "career capper" 1977-78 card for him. 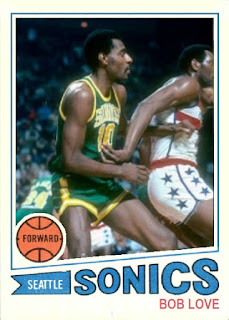