Cards That Never Were is a recurring series in which I create virtual trading cards for players missed in various sets. It is a concept I have borrowed from far too many to list, but I appreciate all of them.
Jim Kaat signed with the Washington Senators in 1957 after a tryout in Chicago. The Chicago White Sox actually tried to sign him, offering him more money, but he ultimately signed with Washington. He made his MLB debut in 1959 and would go on to forge a great career.
After the 1960 season, the Senators moved to Minnesota and became the Twins. Kaat remained with the organization until a midseason trade in 1973 brought him to the White Sox. He was traded to the Philadelphia Phillies after the '75 season, then purchased by the New York Yankees midway through the '79 season. Early in the '80 season, the St. Louis Cardinals purchased Kaat. He pitched for the Cards until midway through the '83 season, when they released him.
In his 25 year career, Kaat went 283-237 with a 3.45 ERA. Kaat made 3 All-Star games and won 16 Gold Gloves. He is considered one of the best players not in the Hall of Fame.
For his efforts, Topps gave Kaat cards from 1960 through 1983. It is understandable that Topps did not give him a final card in their 1984 set, because he was released in June. Still a "career capper" would have been nice, especially for a player of Kaat's ilk. A fan of his from his days with the Sox, I wanted to give him his proper sendoff by creating an '84 card for him. 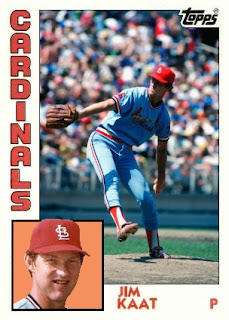