Celebrity Jersey Cards is a weekly series in which I create virtual trading cards for celebrities wearing sports jerseys. Today, we continue our alphabetical journey through all Major League Baseball teams.

Dale Berra was born when Yogi was in the middle of a Hall of Fame career with the New York Yankees. Dale was named after Dale Mitchell, who had made the final out in Don Larsen's perfect game two months earlier. Dale was drafted by the Pittsburgh Pirates and had an 11 year MLB career. Dale and Yogi were reunited on the Yankees in 1985 for 16 games, before Yogi was replaced with Billy Martin. The father-son combo is now reunited on a Celebrity Jersey Card, stemming from Yogi's time managing the Mets, a few years prior to Dale's pro career. 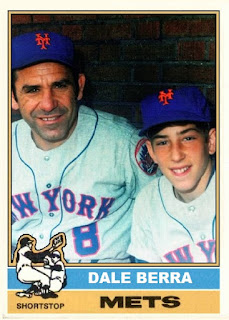 Eli Manning was born in New Orleans, LA, shortly after his father Archie played his last season with the Saints. The elder Manning had a great career, but has been surpassed by Eli and Peyton, both future Hall of Famers. Eli is seen with one of his daughters on his Celebrity Jersey Card. I wonder if she will carry on the Manning athletic legacy? 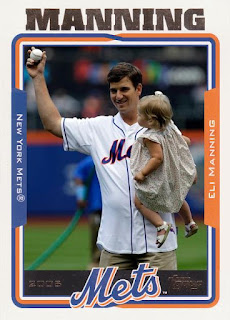 It seems to me that for a long time kids following in their father's footsteps couldn't live up to the legacy. Nowadays there seems to be more sons eclipsing their fathers. Your two cards are illustrative. Am I right?

You are correct. I remember the 1976 set had father son combos (Boone, Bell, Hegan, Coleman, Smalley). Now, there would probably be 30 (?) and many sons would be much better than their dads (Bellinger, Bourjos).