Friend Encounters: Linnea Quigley and Michael West at Days of the Dead Louisville

Days of the Dead returns to Indianapolis July 17-19. As always, it will be a weekend of horror and pop culture fun. Until then, I recall some of my fun times at previous events.

I met and interviewed author Michael west several years ago at Days of the Dead. That interview can be found at On the Beat With Michael West. There are also more interviews with Michael and others at DotD on the Johngy's Beat YouTube channel.
The author of several horror books, Michael is a great guy. He says that his children think the woods near their home have spirits. That seems fitting for Michael. I wonder if he will ever write a book about that?
I always enjoy catching up with him and hearing about his latest projects. Michael is always a fun interview. He is currently working on a new book, but he hasn't revealed details yet. I hope to get a scoop from him at some point before it's published.
I have seen Michael many times at Days, as a celebrity guest and as an attendee. When he isn't promoting his books, he is meeting his favorites. I always find it interesting to see celebrities excited to meet their favorites.
At Days Louisville, Michael met Linnea Quigley, one of the all-time Scream Queens. Quigley has built a 45+ year career mostly in horror films. Quigley embraces her place in horror history and as a fixture on the Mt. Rushmore of Scream Queens.
I have seen Michael meet many of his favorites. I would love to see Michael do a horror story about celebrity conventions and Days of the Dead would be a great setting. Of course, Michael doesn't need my ideas. He is doing quite well on his own.
Learn more about Michael and his books at ByMichaelWest.com. Go to DaysoftheDead.com for all of the info on Indy and the other shows. Also, check Days of the Dead on Facebook for more frequent updates. 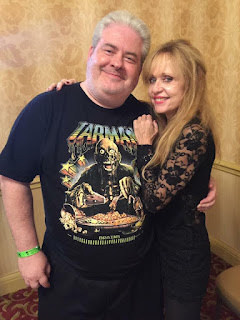 Michael West and Linnea Quigley in Louisville, KT-September 2016.
Posted by Johngy at 6:00 AM