Friend Encounters is a weekly series featuring friends who have met celebrities. With Flashback Weekend this weekend, I am presenting a special Friend Encounters Flashback Weekend edition.
Canadian born Neve Campbell rose to fame on television's Party of Five and on the big screen in Wild Things and Scream. Neve was hugely popular.
Like many others, I was a fan of Neve's. My fandom actually goes back to a Coca-Cola commercial she did in 1991. Neve and Coke make a great combo (even if it was just a paid job for her).
As I have often written, Flashback Weekend is one of my favorite events of the year, It is the first horror or comic con I ever attended. It was only several years after my first time there that I learned the promoters Mike and Mia Kerz are related to my great friend Cuzz Gekas. I don't know how we never made the connection, but we eventually did.
I don't support and promote Flashback Weekend because we are all friends. I do so because it is a fantastic convention. Having great folks like Mike and Mia (and their daughters) running the event only makes it that much better. They work tirelessly to make it entertaining for all.
In 2016, when Cuzz and I were going to Flashback Weekend, Neve was tops on my list. Meeting her surpassed my hopes. She was so fan friendly. She stepped away from her table for every photo request, because the lighting was not good at her table. She cared enough about everyone's pictures to double check. Despite having the longest line that year, Neve made each encounter special.
Thanks to Mike and Mia for their hospitality and consideration. Thanks, too, to Cuzz for facilitating things and for his friendship. We always have a fun time hanging out at Flashback Weekend.

Go to FlashbackWeekend.com for all of the info on this great convention. Also, check the Flashback Weekend Facebook page for more frequent updates. 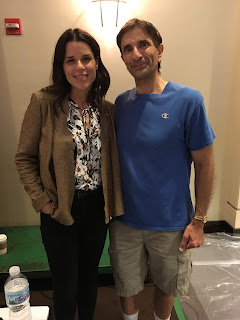