Cards That Never Were is a recurring series featuring virtual cards I make for players missed in various sets over the years. It is a concept I have borrowed from far too many folks to list, but I appreciate all of their efforts.
Thousands of card creations (and not just baseball) can be found in the Custom Baseball Cards Facebook group. One talented creator has a website with his creations featured daily. When Topps Had Balls is the creative effort of Gio and it has about 2,500 cards dating back to 2013. I can get lost in looking at the cards that never were on his site.
One of those cards is for Mike Buskey. The shortstop was signed as an amateur free agent by the Chicago White Sox in 1971, After playing in the Sox system for a few years, Buskey was traded to the Philadelphia Phillies in late 1975. Buskey made it to the majors with the Phillies in 1977, appearing in six games. He got two hits in seven ABs, scoring one run and getting one RBI. He played in the minors in '78 and was purchased by the Houston Aatros late in the season. He would never make the majors again. Topps did not gie him a card for his six games, but Gio did.
I usually feature my creations here, but I made the exception because Gio beat me to it. When I was looking for a good pic of Buskey, I came across Gio's work. There was little sense in me duplicating his effort. This way, I can also promote the great work of a virtual card master! 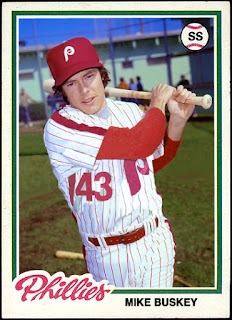