Florida born Scott Thompson rose to fame as comedian Carrot Top, a nickname given to him by a local swimming coach. Carrot Top's comedy routine usually involve a trunkload of props. He has also appeared in a few movies. Carrot Top apparently is a fan of Philadelphia teams, as he previously appeared on a Celebrity Jersey card with the Eagles. This Celebrity Jersey Card shows Carrot Top throwing out a pitch for the Phillies. 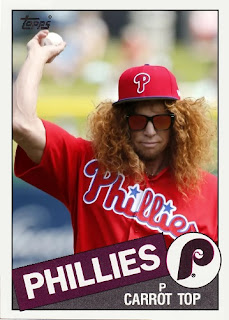 California native actor and comedian Chris Kattan is a second generation member (following his father)  of The Groundlings, a sketch comedy group in Los Angeles. Kattan was on television's Saturday Night Live from 1996-2003. For his Celebrity Jersey Card, Kattan went all out, wearing a full uniform of the Phillies. 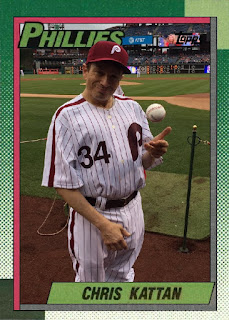