This is a regular series in which I create virtual trading cards for celebrities wearing jerseys. Once again, we are working our way alphabetically through all of the Major League Baseball teams by "Go-Go"-ing to the Tampa Rays.

Gina Schock started her career as a drummer for Eddie and the Eggs, before joining the Go-Go's in the late 70s. She has remained with the Go-Go's through the years. She earned her Celebrity Jersey Card when she joined her Go-Go's bandmates to throw out several first pitched for the Tampa Rays. Pictured with her is outfielder Sam Fuld. On a trivia note, Schock was seen as the drummer for a-ha promo on television, although she never really performed wit the band. 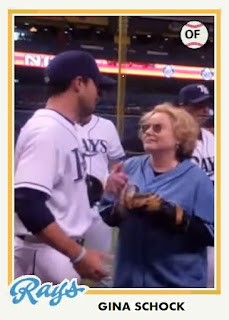 A bassist in The Eyes, Charlotte Caffey switched to guitar when she joined The Go-Gos in 1978. She has remained with the Go-Go's ever since, although she also has written for others and performed in The Graces, her own band. Like her bandmate Schock, Caffey earned her Celebrity Jersey Card throwing out a first pitch for the Tampa Rays, although Caffey's card picture was taken in the lockerroom. 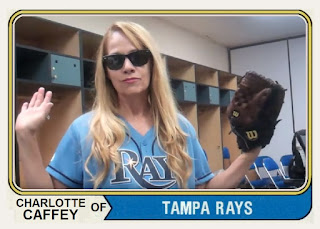