Today I am again featuring Glen Rylko, a dear friend of mine. Glen one-upped me with this one.
I met Glen years ago at some wrestling show. Glen is more of an old school wrestling guy, but he does venture out to indy shows on occasion. I love seeing his FB posts featuring old wrestling memorabilia.
Glen and his wife Alicia support and do great volunteer work for Alicia's House, a food pantry in a south suburb of Chicago. Glen and Alicia also participate in walks for other causes. It always warms my heart seeing them doing these events together.
I also enjoy seeing them at various comic cons. We generally meet a lot of the same celebrities.
One celeb Glen met who I haven't is Kevin Smith. Glen met Smith at his show at the Chicago Theater several years ago. In his social media post, Glen mentioned that "combined, we've lost about 140 pounds since then."
An actor, writer, producer and more, Smith is probably best known for Jay and Silent Bob. Smith has also done a few horror films, which make him a double threat at comic cons. Crossing genres successfully certainly increases his drawing power at any event.
That's an amazing accomplishment for both men. Both men look great now, but ultimately it is about feeling and being healthier. I'm happy that Glen looks good and is doing well.
I look forward to seeing Glen and Alicia once conventions or other events start happening. I always say I love meeting celebrities, but sharing these experiences with friends is really the best part. 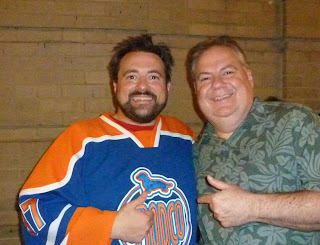