I love this picture. It's a real family meeting a television family. It even looks like a real family portrait.
My buddy Tommy Else and his mom went to the Hollywood Celebrities Show and met Tony Dow and Jerry Mathers, who played Wally and Theodore "Beaver" Cleaver on television's Leave It to Beaver.
I can't believe I have known Tommy for so many years. It seems like yesterday I was emailing him about his audition for Resistance Pro Wrestling. He won that audition and I interviewed him at his first RPro show, which can be found at On the Beat With Eric St. Vaughn.
Over the next 8+ years we have had a lot of great times in and out of RPro. Aside from wrestling, we have gotten together for music, kickball, podcasts.
I'm not Tommy's only podcast adventure. He has a whole network, called (what else?) "The Or Else Network" available on SoundCloud. Other podcasts include, "Jesse Unplugged," with Jesse Anderson, "Checking In," Tommy checking on his friends during quarantine and "Losing Friends," which explores many (sometimes controversial) topics. I hope you check out his work and I am not saying that because I am a proud part of the Or Else Network. 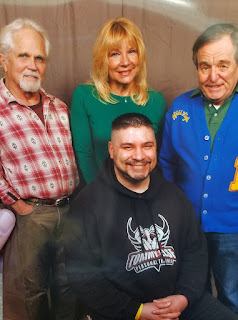 I love that pic!

It seems like Leave It to Beaver returns to popularity every 10 years or so.

There was the original run in the early 1960s.

Then in the early-1970s we would run home from the high school bus stop to watch it. (Yes, as high-schoolers!)

In the mid-1980s it was shown seemingly every day on the TBS superstation, where I dutifully set my VCR to record the episodes.

Then about 10 years ago I bought the entire series on DVD, so my old, scratchy, commercial-filled VHS episodes were no longer necessary.