I am so looking forward to being "On the Beat" at the upcoming New York Comic Con, which runs October 7-10. It is a return to comnic cons and I will be seeing some of my usual con friends, like creator Dirk Manning.
Just because I haven't been able to see my creator friends at comic cons this year doesn't mean I have lost touch with them. Today, I am sharing some news from Dirk Manning.
Dirk is the writer/creator of comic series such as Tales of Mr. Rhee and Nightmare World. I have been a big fan of Dirk's work for several years. I have interviewed him several times, including On the Beat at Wizard World.
Dirk announced via Facebook Live, he is doing a second edition of his popular Write or Wrong (A Writer's Guide to Creating Comics) book. It will be about 25-30% new content. The book release will also coincide with the publication of Write or Wrong #2. Write or Wrong is a collection of Dirk's tips and advice to aspiring young comic book writers. The news of a 2nd edition and a book #2 was greeted with thunderous applause from the hundreds of watchers. 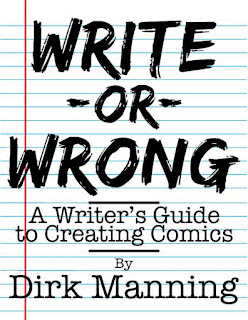 The two Write or Wrong books are not the only projects Dirk has coming soon. He's been extremely busy with his many other creative endeavors.
Dirk has so much stuff going on, you should go to DirkManning.com to get all of the info and learn all about him. Also, follow Dirk Manning on Facebook for more frequent updates, including his recent Facebook Live announcement detailing all of his projects forthcoming. Also, go to NewYorkCComicCon.com for news and schedules. 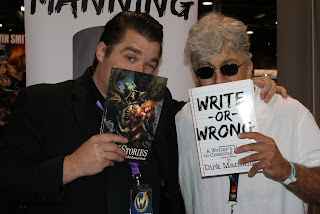