I love this picture. This is really old school. Shirley Jones on The Partridge Family was a big part of our childhood television.
Jones has enjoyed a career spanning 65 years. She has acted on stage, movies and television, as well as released several music albums, including some as part of The Partridge Family. Jones even appeared as Drew's lady friend on The Drew Carey Show, giving her exposure to another generation of fans.
My buddy Tony has met a lot of celebrities and we have met several together. I really wanted to be at the Hollywood Celebrities Show when Tony met Shirley, but I could not make it.
Tony had a great time meeting Jones. I am a bit envious of Tony for this encounter. I just wonder if Tony gets extra pleasure when he beats me to a celeb.
I keep hoping that Jones does another appearance at a show around here. I'd still love to meet her. I might even invite Tony along. 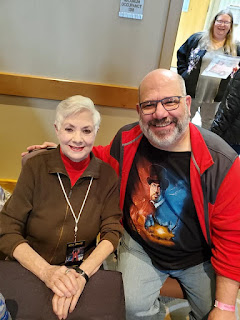