When last we saw Alexa Bliss here, she was wearing a New York Yankees jersey. Today, she earns her second Celebrity Jersey Card by moving west to rep the Columbus Blue Jackets. Seemingly, this wasn't even part of her beloved cosplaying. Already the winner of championships seven times, Bliss is a rising star in the WWE, who has overcome an eating disorder. 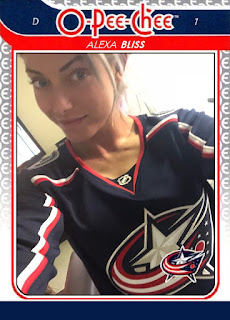 Barbie Blank rose to fame as the double named Kelly Kelly. She won the Divas title once and the 24/7 title, too,,before leaving pro wrestling. Blank was part of an intermission event at a Syracuse Crunch game, thus earning her another Celebrity Jersey Card. We have previously seen Blank repping the Chicago Blackhawks and the Arizona Diamondbacks. 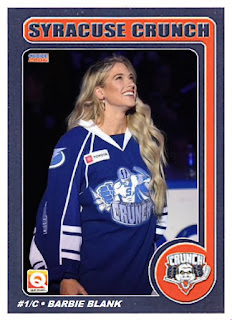