Friendly Encounters is a weekly series featuring friends who have met celebrities. Today I feature Mark Ailes, another of my convention buddies.

Mark is a con bud, but I have no idea where we first met. After all these years and all these cons, they all kind of blur.
Mark is a big fan of the cons, but he also has an impressive body of work, as an author and producer. With book titles like Werewolves, Zombies and Deadly Women and Catfurnado, Zombies and One Killer Doll and movie titles including Clownado and Mrs. Claus, it's easy to see Mark likes to work in the horror field.
Although Mark has worked with many folks in the horror industry, he also rarely misses the chance to also meet them at conventions. I have crossed paths with Mark too many times to count.
At Days of the Dead Indy 2019, it seemed he was everywhere I was. One of those places was meeting Kane Hodder, a veteran of many horror films. Most notably, Hodder played Jason five times in the Friday the 13th franchise.
Mark had the rare chance to get a picture with Hodder in full costume. For once, Hodder wasn't choking him. Mark stated, "He didn't try to kill me because I was wearing one of his shirts." Smart move by my friend.
You can check out Mark Ailes on Amazon to see his books. You can also go to Mark Ailes on IMDB to see all of his movie projects. Also, check KaneHodderKills.com for news on this horror icon. 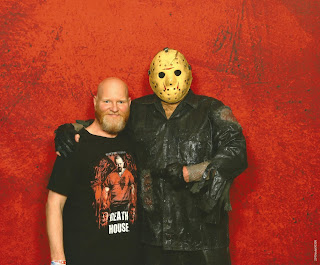 Mark Ailes and Kane Hodder in Indianapolis, IN-July 2019.
Posted by Johngy at 6:00 AM