I have written many times about Mad Man Pondo. Several years back at Resistance Pro, I heard Pondo would be coming in for a show. I knew of the legend of Pondo and I admit I felt a bit intimidated. His reputation wasn't bad, but it was crazy. You don't earn the nickname "Mad Man" for being docile.

Pondo proved to live up to that rep in the ring, but out of the ring, he is one of the nicest people you could ever meet. He always helped with advice to other wrestlers and setting up the ring. He also helped the promoters with the talent, storylines and crowd engagement. He was a complete asset to RPro from every angle.

Over the last several years, Pondo has run Girl Fight Wrestling, a wrestling company shining the spotlight on talented women wrestlers. These are legit women wrestlers, not gimmicky divas. GFW is their place to shine thanks to Pondo.

You don't have to be a wrestling fan to enjoy this book. Pondo's life goes beyond the wrestling ring and the book has a lot of great non-wrestling stories in it.

These are two good guys and good friends. Someday when this pandemic is over, I hope to join them for a night of wrestling fun.

Go to EatSleepWrestle.com for more info on John and his books. Go to GirlFightWrestling.com for info and schedules of Pondo's women's wrestling company. 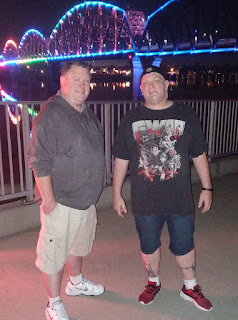 Mad Man Pondo and John Cosper in Louisville, KY-October 2020.
Posted by Johngy at 6:00 AM