The Giant is a mystery/thriller centered on Charlotte (Odessa Young), a graduating high schooler in a small Georgia town. Charlotte's mother committed suicide the year before and her bad boy boyfriend Joe (Ben Schnetzer) mysteriously disappeared the same night. On the last school day of her senior year, Joe reappears just as mysteriously. Adding to the mix is the mysterious murders of young women being investigated by Charlotte's sheriff father.

In the opening sequence, Charlotte ponders, "I wonder if our dreams go on after we wake up, like parallel lives while we sleep." I think that is a very big clue about the entire movie.

The Giant marks the feature film debut of David Raboy, who wrote, directed and edited it. Having those three titles, clearly Raboy has his hands all over the movie. The Giant is dark, dreary and occasionally plodding. The characters utter (sometimes seemingly mumble) their thoughts in short phrases. The aforementioned characteristics might seem negative, but I think Raboy wisely made those choices to set the perfect mood.

I quickly was drawn into Charlotte's world, although I wasn't sure what was reality and what was dreams. The lines blurred. Then another thought occurred. Could we be taking a trip entirely in Charlotte's mind?

Charlotte is clearly disturbed. How disturbed is she though? Could her mother's death have totally unraveled her? Maybe I was reading too much into things. Then it hit me, how hooked into this movie I was. For me, it became less about the mysteries in the town and more about the mysteries of Charlotte's mind.

Another key scene for me starts in the abandoned house where Charlotte's family once lived. Cold, dark and desolate now, Raboy brilliantly juxtaposes it with the bright sun shining through one window. Outside we see a woman hanging from a tree in the woods. In a voiceover, Charlotte mournfully questions, "Why can't I wake up?"

I rewatched that scene several times, looking for more clues. Scenes like this aren't randomly inserted. Whether Raboy used this scene as a clue, a statement or other, it was an impactful scene. Could that scene represent Charlotte's mind?

Much later in the movie, the graduates are seen partying, despite the tragedies occurring in the town. Charlotte remains detached and distant. It's as if life is going on without her.

Young, a 22 year old Australian, has been acting since her pre-teen years. She perfectly captures and creates Charlotte's frame of mind, sometimes in the most subtle ways. You can feel her sadness at the situation happening around her.

I researched Raboy after watching The Giant. In several interviews, he spoke of Young's performance, even admitting to catching deliberate movements and nuances he hadn't noticed previously. Young conveys a lot with subtle movement and speech.

He also spoke of his filming choices. "The movie is so concerned with darkness and imperceptibility and I found that there's no medium like film that conveys that. When you're looking at shadows and you're on the precipice of exposure, but you're not quite there, there's something about the fact that is organic that could suggest images in a way that's real."

I started by writing the film is dark, dreary and plodding at times. If it was bright, happy and fast-moving, it wouldn't be The Giant. It would be an entirely different, and completely less enjoyable, film. I felt tense and uncomfortable at times, but I always felt engrossed.

Honestly, my feelings for The Giant grew more positive over the hours and days after I first watched it. It sort of took space in my mind and made me reflect on Charlotte's situation. I replayed many scenes in my head.

Some questions were left without answers, but the most important question has a definite answer. Did I enjoy The Giant? Yes, I did. 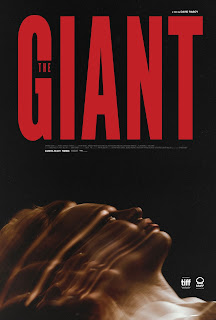