Cards That Never Were is a recurring series in which I create virtual trading cards for players missed in various sets. It is a concept I have borrowed from far too many to list, but I appreciate all of their efforts. More of my creations and many great creations of others can be found in the Custom Baseball Cards Facebook group (and not just baseball cards).
Sean Payton had a great career at Eastern Illinois University. Those teams earned the nickname "Eastern Airlines" because of their powerful passing attack. Depite that success, Payton wasn't selected in the 1987 NFL draft.
Like Tuesday's feature Mike Hohensee, Payton signed with the Chicago Bears as a replacement player for the striking NFL regulars. He appeared in three games, going 8-23 for 79 yards with no touchdowns and one interception.
Payton also played in the Arena Football League, the Canadian Football League and other pro leagues, too. He played for the Chicago Bruisers, Pittsburgh Gladiators, Ottawa Rough Riders, and Leicester Panthers.
He began coaching as an assistant at San Diego State in 1988. After a few college stints, he joined the NFL as a QB coach for the Philadelphia Eagles in 1997. He also coached for the New York Giants and the Dallas Cowboys, before becoming head coach of the New Orleans Saints in 2006.
Payton did not receive a Topps card in 1988. His three games did not merit one, but that doesn't stop me from wanting to give him one. I turned to my friend Lynn from the previously mentioned FB group, who came through as always. 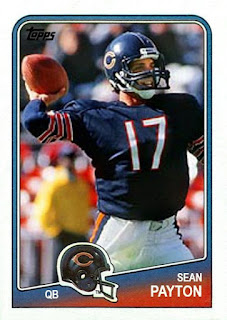