Tony Feddeler has appeared here several times. After Tony and I crossed paths at comic cons, softball games and wrestling shows, we finally decided we might as well become friends. Actually, I am not sure where I first met Tony, but we did become friends and have hung out at many of those events ever since.
Tony turned me onto Joel Robinson, an American horror artist. That probably sounds more macabre than it really is. Joel creates beautiful art featuring horror film icons like Freddy Krueger, Elvira and Chucky, but you'' also see creations like Edward Scissorhands in his portfolio. 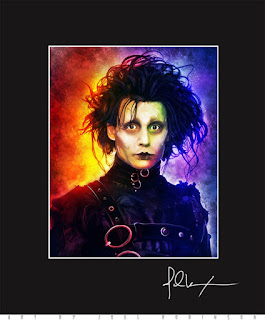 I always make it a point to stop by Joel's booth at any con. He always has new stuff to see and old stuff that still amazes me. Joel is extremely talented and very open to talk about his artwork.
Tony doesn't have any artwork, but he does own a nice Seattle Seahawks collection. Ever surly, he's nowhere near as fan friendly as Joel though. Seriously, Tony is one of the nicest, funniest people around and I am glad to call him a friend.
Check out Joel's fantastic work at JoelRobinsonArt.com. Also, follow Joel Robinson on Facebook for more frequent updates. 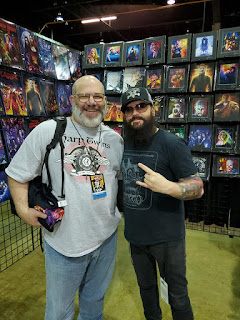