Born in St. Louis, MO, but raised in the Chicago suburbs, Candace Parker starred at Naperville Central High School and Tennessee, before joining the WNBA Los Angeles Saprks. Recently, Parker returned home by signing a free agent contract with the Chicago Sky. Parker donned a Bulls jersey as part of the NBA All-Star game festivities in Chicago in 2020 to earn her Celebrity Jersey Card. Her #9 jersey is curious, as she wore #3 with the Sparks.and Tennessee and #32 in high school. Luol Deng and Ronb Harper are the most notable Bulls to sport that number. 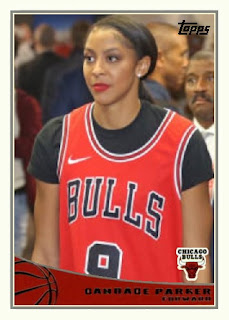 I met Australian Bonnie Gillespie through the Legends Football League. Because she played in her native land, I have not met her yet, but I am hoping someday it happens. Bonnie moved from football to MMA fighting, where she destroyed her first opponent. Bonnie has overcome a lot in her life and "the little nugget" is an inspiration. She wore the classic MJ #23 jersey while striking a single bicep pose and securing a place in Celebrity Jersey Card history. 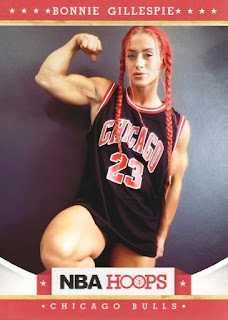