Celebrity Jersey Cards is a weekly feature in which I create virtual trading cards for celebrities wearing jerseys.

Detroit native Duff Goldman is a pastry chef, television personality and cookbook author. In 2002, Goldman opened Charm City Cakes in Baltimore. He gained more exposure on Ace of Cakes, a reality show focused on his business. Since then, Goldman has worked on many shows. A big sports fan, Goldman donned a New York Rangers jersey to earn a Celebrity Jersey Card. 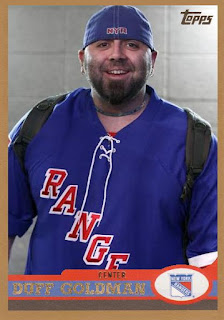 British chef, restaurateur, television personality and writer Gordon Ramsay was actually born in Scotland. In 2004, Ramsay's Kitchen Nightmares and Hell's Kitchen both debuted. Ramsay's unique style brought fame quickly. Ramsay has since opened many restaurants, including multile locations in Las Vegas, whwre he became a fan of the Las Vegas Knights. Not a fair weather fan, Ramsay wore a Knights jersey to a game and earned his Celebrity Jersey Card. I don't know his connection to #19, but that number is worn by winger Reilly Smith. 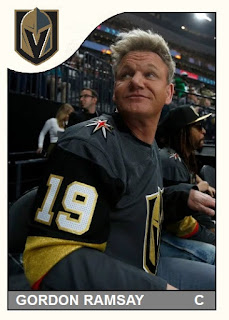