Nobody better represents the Los Angeles Angels better than Gene Autry. A major star of movies and television, Autry was also a minority owner of the minor league Hollywood Stars. When MLB announced plans to have an expansion team in Los Angeles, Autry sought the radio broadcast rights, but was talked into buying the team. The team moved and/or changed names a few times, but always stayed close to the Los Angeles area. Eventually the Angels were sold to the Walt Disney Company. The Angels retired #26 (as in 26th man) to honor Autry. While he once turned down an offer to play minor league ball, Autry donned the full Angels uniform a few times for various events and also earned extra points for that on his Celebrity Jersey Card. 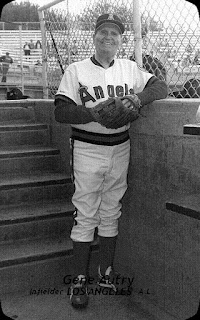 Jackie Autry is the widow of Gene Autry, as well as being the former owner of the Angels and an Honorary American League President. She started as a switchboard operator at a bank nd moved up to vice president eight years later. Beloved and embraced by the Angels organization, Jackie threw out the first pitch to earn her Celebrity Jersey Card. She was accompanied by former Anaheim Mayor Tom Daly, who missed his chance at a Celebrity Jersey Card by wearing a suit. 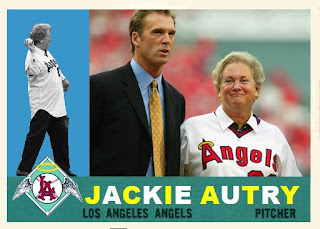