Born in Baltimore, James Beckum adopted Milwaukee as his home. He started his Negor League career in 1950, but military service interrupted it. Returning, he played for the East St. Louis Giants. More importantly, he organized a youth baseball league in Milwaukee. The Beckum-Stapleton Little League is the longest-running inner-city baseball program in the country. Beckum was among several Negro League players honored by the Milwaukee Brewers. Beckum looked great tossing a first pitch and earning his Celebrity Jersey Card. 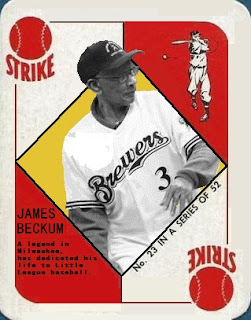 Catcher-outfielder James Portier played in the Negro Leagues with the Indianapolis Clowns, Key West Eagles, Victoria Eagles and New York Black Yankees. Some sources indicate he did play in the MLB with the Brooklyn Dodgers, but I found no confirmation of that. Like Beckum, Portier was on hand when the Brewers honored the Negro Leaguers. The elderly Portier showed great form tossing the first pitch and earning his Celebrity Jersey Card. 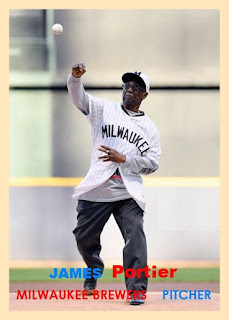