On Friday morning, the Atlanta Dream held a press session featuring Elizabeth Williams and Monique Billings. This was my first time in a Dream media session and it brings my total WNBA teams to nine of the 12). .It was an unusually short session, because the team was preparing for their game against the Indiana Fever that night. The media session can be found at On the Beat With the Atlanta Dream 05/21/2021.

Both players discussed playing with and against Jessica Breland, who played for the Dream in 2018 and 2019. The well-traveled Breland started her WNBA career with the New York Liberty in 2011, but she was actually drafted by the Minnesota Lynx with the 13th overall pick in the 2011 WNBA Draft. Midway through the 2011 season, she joined the Connecticut Sun. She was out of the WNBA in 2012, but returned with the Indiana Fever in 2013. After just one season with the Fever, she signed with the Chicago Sky. She played four seasons with the Sky, before joining the Dream for two seasons. In 2020, she played for the Phoenix Mercury. This is her first season back with the Fever. Along the way, Breland made a lot of friends and is a very popular player.

Williams and Billings also talked about their roles on the team and the team's game plan in general. Billings gave a review of her team's performance in the previous game. Both players indicated the Dream has the potential, citing the excellent defensive showing. The team needs to play consistent throughout the game, not just a half.

The Dream went into Friday night's game 0-2, but Indiana was also looking for their first win against three losses. In the end, the Dream edged the Fever 83-79 in a game that went down to the wire.

Go to WNBA.com for more info on the Dream and the league. Also, check my recurring coverage here, on GlobalTravleerUSA.com, Patch.com and GlobalWomensSportsRadio.com. 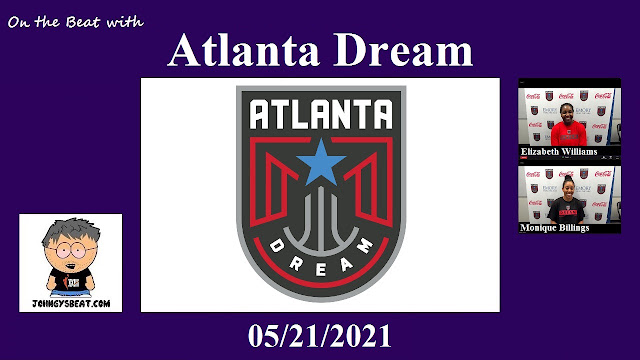