On the Beat With Chelsea Gonzales

Yesterday, I had the pleasure of interviewing Chelsea Gonzales, South Mountain Community College Softball Assistant Coach. Still at a young age, Gonzales already has an impressive resume and will be adding to it in the 2021 Summer Olympics.

Gonzales racked up plenty of awards, honors and accolades while playing for the Sun Devils, but one of her favorite memories was one hit. It was a big hit, though or I should say it was a “grand” hit, but I'll let you hear about that in our interview.

After ASU, Gonzales started playing professional softball with the National Pro Fastpitch Cleveland Comets. This is when I first met her, when the Comets came to Rosemont to play the Chicago Bandits.

Gonzales also plays for Team Mexico, who will be competing in the 2021 Summer Olympics. The Olympics were delayed from 2020 due to the pandemic, but on July 23, Gonzales will join her Team Mexico mates in going for the Gold as softball kicks off the events.

Coincidentally, her route to Team Mexico was originally delayed, but by her own choosing, a choice she now says she regrets. Fortunately for all, things worked out and Gonzales did join Team Mexico.

Her path to coaching at South Mountain CC was also interesting. An idea, a desire and a phone call led her to SMCC.

Gonzales talked about all of this and more during our interview. There was so much ground to cover and I wanted to hit all of it. She was a great college player, who is now transitioning to coaching, while also representing her country in the Olympics. Each of those topics could have been a separate interview.

I always find the dynamic between such a young coach and her players interesting. So close to her own college days, Gonzales can relate well to the players, but drawing a line can be a challenge. For Gonzales, it is a challenge she recognizes and is handling well.

I really enjoyed this interview. Gonzales is a very mature young athlete/coach, but she hasn't lost her fun nature and never will, another fact she stated in our talk.

Good things have come to Gonzales and will continue to do so, but she has worked very hard to earn everything. Her future is bright and I look forward to watching her career develop, wherever it takes her. For the immediate future though, it will take her to Tokyo, Japan.

I thank Gonzales for her time and consideration in talking to me. I wish her and Team Mexico luck in the upcoming Olympics. It would be awesome to see her add a Gold medal to her other awards.

Our interview can be found at On the Beat With Chelsea Gonzales. I hope I can revisit Gonzales later this year to discuss her experience there. 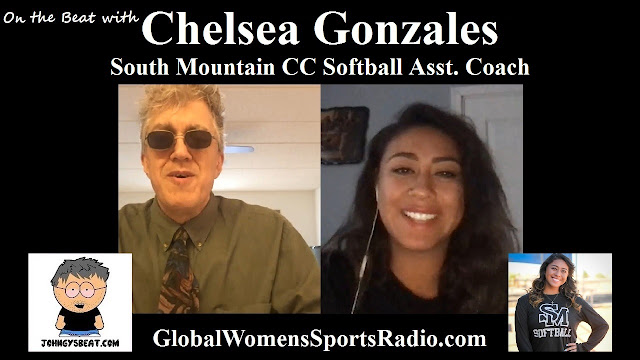