Cards That Never Were is a recurring series in which I create virtual trading cards for players missed in various sets. It is a concept I have borrowed from far too many to list, but I appreciate all of their efforts. More of my creations and many great creations of others can be found in the Custom Baseball Cards Facebook group (and not just baseball cards).
Vida Blue was selected by the Kansas City Athletics in the second round of the 1967 MLB draft. He made his MLB debut in 1969 and pitched for the A's through the '77 season. Along the way, he won the Cy Young and MVP in '71 and three World Series with the A's. He was traded to the San Francisco Giants prior to the '78 season. After five seasons with the Giants, he was traded to the Kansas City Royals. He pitched two seasons for the Royals, missed the '84 season and signed with the Giants for the '85 season. After two seasons with the Giants, he was released and signed back with the A's, but did not appear in the majors with his original team. All told, he went 209-161 with a 3.27 ERA.
For his efforts, he received cards in every Topps set from 1970-'83 and 86  and '87. That left nly an '84 to be filled. 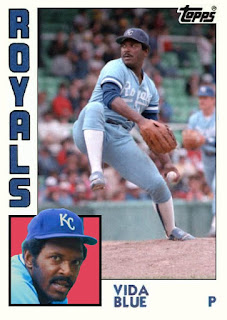