Things got a little more serious as Coach Laimbeer fielded questions from the real press. First, he discussed the state of the team. Despite being 9-3 in second place in the WNBA Western Conference, the team is not yet where he wants it to be. Not being negative, Coach Laimbeer cited areas needing improvement, as well as strengths of the team.

Coach Laimbeer then talked about center Liz Cambage, who returned to the team after missing last season. He noted the differences in her play this season versus her last season.

On the topic of women coaching in the NBA, Coach Laimbeer gave straightforward and insightful thoughts. There are opportunities in the NBA now for women and the money is much better than in the WNBA. While these women are losses to the WNBA, other women will get opportunities in their absences.

Lastly, Coach Laimbeer talked about the schedule of the WNBA. With three games against New York in a short span, he sees it as both an advantage and disadvantage, depending on timing. The Aces haven't played the Chicago Sky at all, but will now face the team when it is back at full strength.

Wilson started her session talking about the Las Vegas Golden Knights. Wilson attended a game and enjoyed participating in the pre-game entertainment. She also talked about the importance of women, including Dawn Staley, getting more opportunities in the NBA. She finished by discussing the WNBA All-Star game being in Las Vegas this season. I'm sure she will be playing in that game in front for her home team crowd.

Rookie Slocum closed out the session, starting with talking about her role on the team and her preparation. Sitting on the bench doesn't mean not being in the game. She takes her role seriously and uses her time on the bench to learn and to help her teammates. She talked about the adjustments she has had to make and the biggest challenges and differences in transitioning to the WNBA.

Las Vegas is riding a four game winning streak, including a 100-78 victory over New York on Tuesday. The Aces host the Liberty tonight, which will be their third matchup in the last 14 days.

The Aces trail the Seattle Storm by two games, but have a three game lead on the Los Angeles Sparks, who sit in third place. While Coach Laimbeer wants to win every game, his focus is always on being ready come playoffs.

The interview can be found at On the Beat With the Las Vegas Aces 06/21/2021. Also, check back here for my recurring coverage of the WNBA. 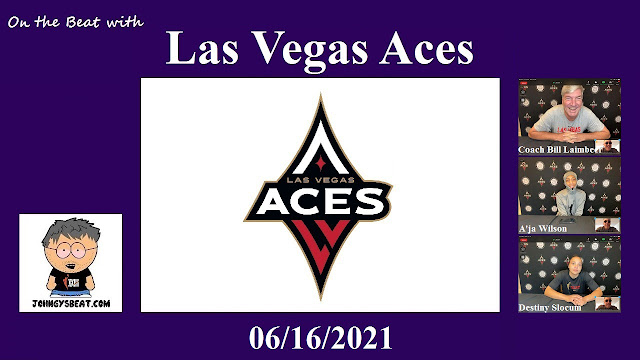