On Sunday, the Minnesota Lynx picked up their first victory of the season. The Lynx upset Connecticut, who came to the Target Center in Minneapolis with a 6-1 and in first place in the Eastern Conference. It took an overtime period to accomplish the feat, but it goes in the win column.

Team stats for the game were fairly similar. The Lynx outrebounded the Sun 38-28, for the only major stat difference. Sylvia Fowles just missed a double-double (24 P, 9 R).

It sounds cliché to say, but the Lynx really have played better than the 1-4 record would indicate. While they are in the lower half of most team stats categories, they are not last in any. The main issue seems to be scoring, as they rank 11th with a 75.8 points per game average. Unfortunately, the Lynx average giving up 81.8 ppg, which ranks 7th.

On Wednesday, Head Coach Cheryl Reeve and Crystal Dangerfield took part in a media session. Predictably, the main topic of discussion was the win. Both women also discussed the general nature and focus of practices.

With the winless weight off their back, the Lynx need to build on the win. It doesn't mean they need to run off a big win streak, but they can't let the win be the outlier. A 1-4 start is not a death sentence in the long season, but they can't afford to start 1-10. They need to start winning weeks to get back to .500 and then build on that.

Tonight, the Lynx host the Atlanta Dream (4-2). This will be another test for the Lynx. Are they heading back on track? Can they build on their first victory? We should get some answers tonight.

The interview session can be found at On the Beat With the Minnesota Lynx 06/02/2021. Check back here for my recurring WNBA coverage. 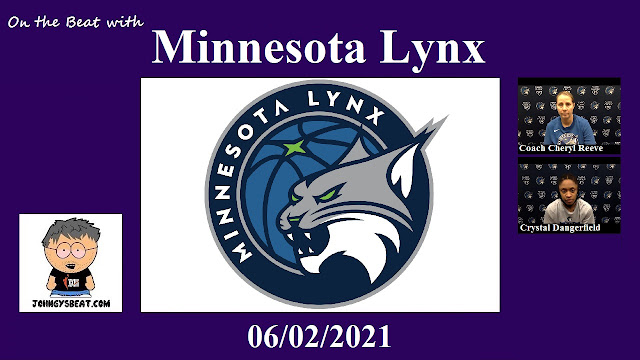