Flashback Weekend is getting closer and closer. It's now only 13 days away. That's only two weeks until Chicago’s largest and longest running Horror Convention returns. This year, it's in a new home, the Hyatt Regency O’Hare Chicago at 9300 West Bryn Mawr Avenue in Rosemont.

In Chicago, you can't talk horror without mentioning the legendary Svengoolie. Sven will be signing autographs and posing for pictures, but he will also host the Sinister Visions Costume Contest on Saturday afternoon. As of this writing, this is the first scheduled appearance for Svengoolie and it is sure to be a major draw. After 40+ years of entertaining fans, Svengoolie is more popular than ever. If you haven't met Sven yet, Flashback Weekend is the perfect place. I recommend getting in his line early or better yet, get the pro photo op with him to ensure you get that memory with Svengoolie.

There are many vendors promoting and selling cool stuff. Authors, artists and creators of all kinds display their creations.

One of the coolest booths belongs to Sinister Visions. Operated by Chad Savage, Sinister Visions is a dark art and graphics studio. Chad combines his lifelong love of Halloween and horror with 25+ years of graphic design and illustration experience to produce amazing products. Chad assured me he will have his usual large supply of original art prints, pins, patches, stickers and other horrifically fun stuff illustrated and designed by him.

Other events scheduled for the weekend include screenings, panels, Q&A's, Saturday's afterparty and much more. It really is a weekend of fun and friends.

Speaking of friends, I'll be covering Flashback Weekend with my friend Cuzz Gekas. I am sure I will see plenty of other friends there, too, including Mike and Mia Kerz, the awesome folks who run Flashback Weekend.

Flashback Weekend runs July 30-August 1. Go to FlashbackWeekend.com for more info and updates. Check back here for my coverage. 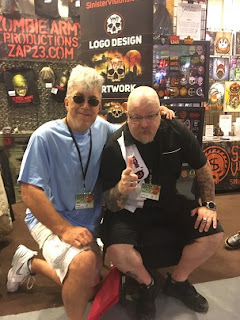