I have never been this excited about the Olympics, which start tomorrow in Tokyo, Japan. I always respected the athletes, but I never had much interest, except on rare occasions like the 1980 USA Miracle on Ice. This time it's different. This time it's personal.

Many of the softball players from Team USA and other countries are friends of mine. I watched them up close as they played in National Pro Fastpitch and other leagues in preparation for the Olympics.

Softball returns to the Olympics for the first time since 2008. It will not be part of the 2024 Olympics in Paris, but will probably be back for the 2028 games in Los Angeles. The 17-game softball competition culminates July 27 with the gold medal game, which should feature Team USA.

Led by Monica Abbott and Cat Osterman, two of the greatest pitchers of all time, Team USA is ranked No. 1. Also on the main, 15-person roster is pitcher Rachel Garcia, 2018 and 2019's USA Softball Collegiate Player of the Year. Pitching tends to dictate outcomes, especially in tournaments like this.

It's been especially great seeing their recent social media posts after they arrived in Tokyo. Witnessing their efforts and talking to them over the last few years, I love seeing them realizing their dream.

As much as I appreciate the passion these elite athletes have for their careers, I am also amazed at their dedication to growing the sport. After playing two-hour games in the heat, it is not unusual to see them sign autographs and meet with young fans for the next two hours.

Of course, I’ll be cheering for Team USA, but with friends on every other team, I will be watching and wishing good performances to all.

The only disappointment so far was the recent announcement that the alternates (Taylor Edwards, Hannah Flippen and Keilani Ricketts) could not attend the games and were heading home. I don't know the reason, but I am guessing it is part of the COVID precautions limiting the overall attendance. No mater the reason, it has to be very disheartening for the three and even their teammates who hated to see them go.

These three worked just as hard as their 15 full roster mates. They were just as excited, even if they weren't going to play. Now they will watch from home as their teammates go for the gold.

Check back here, on GlobalWomensSportsRadio.com and GlobalTravelerUSA.com for my coverage of the Olympics. Good luck to my softball friends! 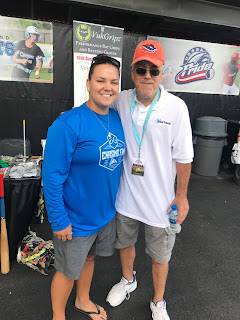