On the Beat With Cam Raithel

Remember the name Cam Raithel. This young woman is on the early part of a path that should lead to a career inside a professional wrestling ring.

A former tag team champion at Resistance Pro Wrestling and the reigning champ of the Southside Occupational Academy, Tommy started Cam on her journey by being her first trainer. It was through the suggestion of RPro co-owner Jacques Baron that Tommy started training Cam, then a 16 year old high school student.

In addition to being a wrestler at RPro, Tommy was the ultimate utility person. Throughout the years, at various times, Tommy ran the Gorilla position, reffed, organized the card, did broadcasting and more. Because of his versatility, he was the perfect person to help Cam get started.

Tommy developed a program to introduce Cam to virtually every part of wrestling. He wanted to expose her to all aspects to help her better understand how everything comes together. Along those lines, they watched wrestling videos and analyzed ring entrances, move sequences, the psychology (in and out of the ring) and more. They would even practice announcing the matches.

After training with Tommy for more than two years, Cam started officially training at the Freelance Wrestling Academy. An injury to her elbow derailed her in-ring training, but didn't prevent her from attending sessions and soaking in everything. The injury slowed her progress, but did not dampen her enthusiasm. In fact, it might have increased her passion.

Cam has since recovered and has resumed in-ring training. Recently on social media, she posted a video of her performing some moves. You could see her athleticism and the overall potential. You can also see her eagerness and pride.

This basically takes us to the interview. I remember Tommy telling me early on about training Cam. I was instantly intrigued and wanted to follow and document her progress. We wanted to wait a bit until Cam was a training veteran. Recently, we felt the timing was right and The Johngy Or Else Podcast, Johngy's Beat and Global Women's Sports Radio were the perfect vehicles to start telling Cam's story.

Cam talks about her interest in wrestling, her training, her goals and more. She speaks with the zeal of a young adult starting her career, but also the calmness of a seasoned vet. She is focused and poised, without losing any of the fervor she had on day one.

While you will watch Cam tell her story and answer our questions, I also wanted to include the voice of a select few who know her best. I first went to Freelance Trainer Bryce Benjamin to get his thoughts.

Bryce stated, “Cam's greatest strengths so far are her passion for wrestling, but more importantly her passion to learn. Unfortunately she got an injury almost immediately after starting, but that hasn't stopped her. She's been rehabbing it and shows up to every class and does what she can at the moment physically,  while watching and listening to everything she can.

Wrestler Missa Kate has also been training Cam. Missa Kate, who recently wrestled Nyla Rose on AEW Dark, added “Cam's greatest strength is she is great at listening and paying attention. Unfortunately, due to her injury she wasn't allowed to be in the ring, but she still came to every practice she was able to attend to still watch and learn. Recently, she was cleared to be in the ring. When she started training again, it showed how much she has paid attention because she was able to pick up a lot. You can tell she is extremely passionate about wrestling. It radiates off of her.”

In closing, I had to give the final word to her Sensei Tommy. “Her strengths are passion, determination and discipline. As long as she maintains all of those, she can go as far as she wants in this business.”

Much like Cam is in the infancy of her wrestling career, Tommy and I are at the beginning of our documentary journey. I have always wanted to follow an athlete from the start to the top. On The Johngy OR Else Podcast on Spotify, Johngy's Beat and Global Women's Sports Radio, Tommy and I will be doing just that as we watch and record Cam's progression.

Twenty years ago, nobody heard of Rebecca Quin of Limerick, Ireland. Today Becky Lynch stands as a multi-time champ and one of the most popular wrestlers in the WWE. Cam Raithel. Remember the name Cam Raithel and remember where you first heard it.

Our interview can be found at On the Beat With Cam Raithel. Also, check out The Johngy OR Else Podcast on Spotify. 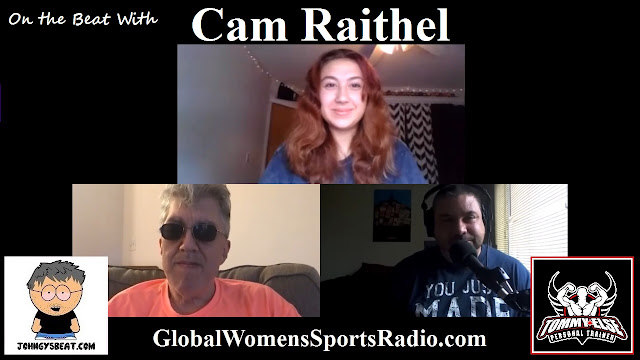