On the Beat With Jennifer Haas

Jennifer Haas is a Brazilian Jiu-Jitsu champ, a fitness competitor, an aspiring pro wrestler, a mom and more. She's got a lot going on and great stories to tell. Earlier this week, my podcast partner Tommy Else and I talked to Jennifer about all of this for The Johngy OR Else podcast and Global Women's Sports Radio.,

Growing up in Reading, Pennsylvania, Jennifer didn't foresee stepping into the wrestling ring, but given her great grandmother's interest, it might have been a natural path, even if it took her a bit to get there. Her great grandmother was a big wrestling fan, actually becoming friends with many of the wrestlers, including the legendary Andre the Giant.

Jennifer didn't start out pursuing a career inside the squared circle, however. She got married, had children, and started working in the education system.

As Jennifer states late in the interview, life takes you where you should be. For Jennifer, that journey started in the physical world of Brazilian Jiu-Jitsu. About seven years ago, she started training in BJJ. Currently, she is a brown belt, but she is well on her way to earning a black belt. Along the way, she also became a two-time world champ at purple belt.

At the American National International Brazilian Jiu-Jitsu Federation Championship last week, Jennifer competed in her first tournament as a brown belt. She won her first match and won a gold in Gi and a silver in No-Gi.

As a seasoned competitor, Jennifer looks to the match she lost by points as one that will help her grow the most. She is also quick to thank her coach Fredson Paixao.

Fresh off the American Nationals, Jennifer is vying for the title of Ms. Health & Fitness, which would earn her the cover of Muscle and Fitness HERS, as well as $20,000. Ever humble, Jennifer is pretty low key about the contest which requires voting via Facebook, but her friends and supporters are rallying around her, voting her into the next round. Voting for this round ends Thursday, July at 7 PM PST.

As busy as she is, she also started training in pro wrestling (coming full circle to her great grandmother's passion). She just finished her first training session, filled with taking bumps and running the ropes.

In addition to her great grandmother's connection to wrestling, Jennifer has another tie to the sport. She is the daughter of WWE Hall of Fame wrestler Tito Santana, a fact she didn't learn until fairly recently.

Lastly, Jennifer talked about teaming with her daughter Jordan in a mother-daughter fitness journey. They will push each other to reach their fitness goals and to help others. Both admit it is a work in progress and a learning experiment. Since they are sharing their challenges and achievements on their JHaasFitness Instagram account, everyone is invited to follow their experience.

Tommy and I covered a lot of territory with Jennifer and are very grateful for her time. We plan on following her path and hope to get updated interviews with her in the future. We thank her for her time and we wish her luck in the Ms. Health & Fitness contest and we encourage our listeners and readers to vote for Jennifer!

Our interview can be found at On the Beat With Jennifer Haas. Also, check out all episodes of The Johngy OR Else Podcast on Spotify. 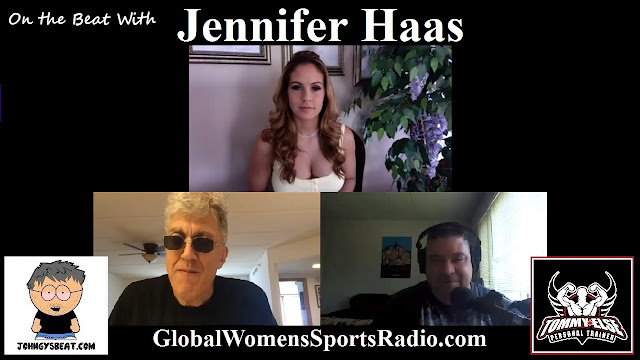