The Phoenix Mercury held a media session featuring Diana Taurasi after game day shoot-around. Surprisingly, among the few topics, that night's game with the Minnesota Lynx was not discussed.

The session started with Taurasi discussing teammate Brittney Griner. Taurasi praised Griner's play, but wasn't so complimentary of her team's overall shooting. Taurasi talked about the team's inconsistencies. At 7-8 (then), those inconsistencies are holding the Mercury from sustaining winning streaks.

Lastly, Taurasi talked about the Olympics. A four-time gold medal winner at the Olympics, Taurasi had a lot to say about representing her country, playing with her Phoenix teammates and her other Olympics.

Any time I can be in a media session with Taurasi is a privilege. The team GOAT gets bounced around a lot, but Taurasi is truly in the conversation for WNBA GOAT. She recently became the first WNBA player to reach 9,000 points in her career.

Among a long list of career achievements, Taurasi is a three-time WNBA champ and a 10 time WNBA All-Star. She also is one of the best players in media sessions. She has the knowledge as a veteran of 17 seasons and the enthusiasm of a rookie.

Unfortunately for Taurasi and the Mercury, Minnesota would beat them handily 99-68. Taurasi's thoughts on shooting inconsistencies were on target, as the Merc shot only 32.8% (21/64), as opposed to the Lynx's 55.1% (38/69). The Merc also lost the rebound battle 41-26. Those stats will not get you many wins. Taurasi had 11 points on 2-9 shooting. For the season, Taurasi is hitting 36,3% from the field, her worst percentage of her career (except for her abbreviated 2019 season of six games

The Mercury stand at 7-9, in fifth place in the Western Conference. They are in a virtual tie with Washington (7-10) for what would be the final playoff spot since the WNBA ignores conferences in the playoffs. More unfortunate news for the Mercury comes in the way of their next three games. Heading into the Olympics break, they travel to Las Vegas, then have a home and away series against Seattle. Facing the two best teams isn't the best way to gain momentum.

That interview session can be found at On the Beat With the Phoenix Mercury 07/03/2021. Check back here, on Patch.com, GlobalTravelerUSA.com and GlobalWomensSportsRadio.com for my recurring coverage of the WNBA. 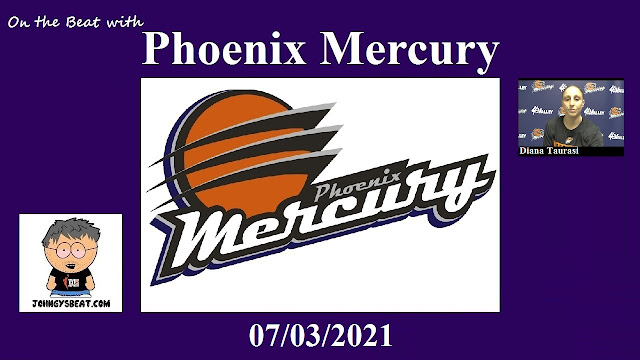