Born in Pennsylvania, country music singer and songwriter Gabby Barrett finished third on the sixteenth season of American Idol. She has opened for Tony Keith and Keith Urban. Her debut single "I Hope" topped Billboard's Country Streaming Songs chart as well as the Country Airplay chart in April 2020. Barrett returned to her home area to sing the National Anthem for the Pittsburgh Pirates and earn her Celebrity Jersey Card. 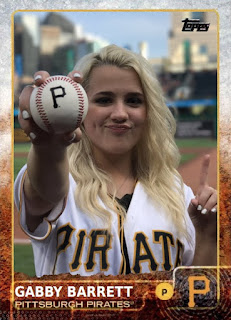 Pittsburgh native Jackie Evancho started singing at an early age. Since 2009, she issued a platinum-selling EP and eight albums, including three Billboard 200 top 10 debuts. Billboard ranked Evancho in its yearly Classical Albums Artist for several years. Evancho sang the National Anthem a few times for the Prates on her way to a Celebrity Jersey Card. For the featured appearance, she wore #16, most notably worn by slugger Al Oliver. 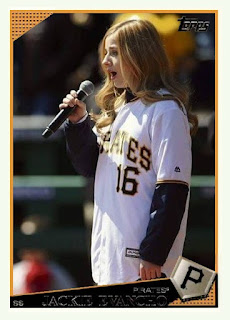