Cards That Never Were is a recurring series in which I create virtual trading cards for players missed in various sets. It is a concept I have borrowed from far too many to list, but I appreciate all of their efforts. Other creations of mine and many others can be found in the Custom Baseball Cards Facebook group (which is not just baseball cards, despite the name).
After starring at Boston College, Fred Willis was selected by the Cincinnati Bengals in the 4th round of the 1971 NFL draft. Willis played one full season with the Bengals, before being traded to the Houston Oilers midway through his second season. He stayed with Houston and retired after the 1976 season. In his career, he rushed for 2,831 yards for a 3.6 yard average with 18 TDs.
For his efforts, Topps gave Willis cards in sets from 1972-1975. I created a 1976 card, also featuring QBs Lynn Dickey and Dan Pastorini and a 1977 :career capper" for Willis. 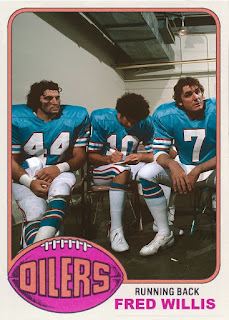 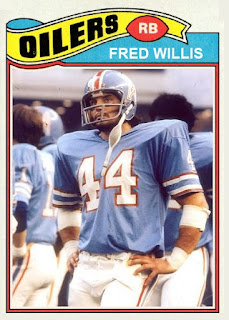