Cards That Never Were is a recurring series in which I create virtual trading cards for players missed in various sets. It is a concept I have borrowed from far too many to list, but I appreciate all of their efforts. You can find a lot of custom card creations in the Custom Baseball Cards Facebook group (not just baseball despite the name).
Jerrel Wilson was selected by the Kansas City Chiefs in the 11th round of the 1963 AFL Draft. He would play 15 seasons with the Chiefs, before finishing his career with New England for the 1977 season. He was a 3x Pro Bowler and one of the greatest punters of all time. Unfortunately, punters don't get the Hall of Fame consideration they deserve.
Wilson also didn't get the card representation he deserved. He first appeared on a Topps card in their 1969 set. He was missed until the 1972 set, then he received cards through the 1978 set. I created a "career capper" '79 Topps card to commemorate his one season with the Patriots. 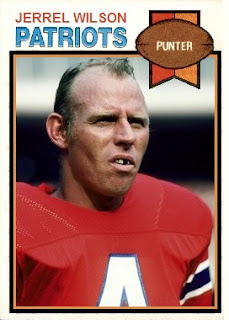