Several years ago, Jungle Boy appeared at Resistance Pro Wrestling. I heard of him, but had never seen him live. I was excited to finally see him perform and he did not disappoint. In fact, he was far more polished than I expected a wrestler of his age and experience. I thought he had a bright future.

Unfortunately, he did not return to RPro. Even more unfortunately, I failed to get a picture with him when he was there.

I did get to talk to him that night though. I told him a few of my stories of interacting with his dad. For those who don't know, Jungle Boy is the son of the late Luke Perry.

I had several fun exchanges with the elder Perry. One involved him unintentionally almost costing me an interview with Lauren Holly. Another involved him joking with my photog pal Jack, calling him "Sniper" for his quick and accurate shooting ability. Both became long-running jokes whenever I saw him at future events. Like all, I was terribly saddened by his passing.

Since then, Jungle Boy has made an impression on the wrestling world. He is currently signed with All Elite Wrestling, where he is a rising star.

Recently, AEW and Pro Wrestling Tees held a charity softball game to benefit PAWS. I got to meet Jungle Boy there and finally got a picture with him.

Jungle Boy has a bright future. Still a young 24, he is still improving. He seems to have his father's great qualities, too. He's humble, well-spoken and respectful of his business and fans.

Folly him at @boy_myth_legend on Instagram. Also, go to AllEliteWrestling.com for more news. 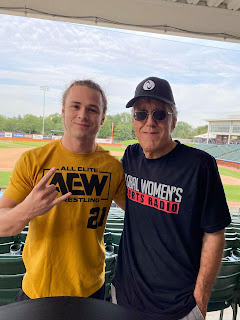