The bulk of the conversation focused on this season and next season, But there were a couple other topics thrown into the mix. For the most part, the team looked loose and relaxed and proud of their accomplishments this season.

Losing the single game elimination playoff to the Phoenix Mercury by one point could not have been easy to accept, but the team went out gracefully. The Liberty have no reason to be anything but proud. This team won two games in last season's abbreviated schedule. It was almost a certainty they would improve on that 2-20 record this season. They lost the same amount, but managed to win 10 more games to finish 12-20 and squeak into the playoffs as the eighth seed. A 12-20 season wouldn't ordinarily be a source of pride, but the big improvement, coupled with a playoff appearance is reason enough for the Liberty and their fans to have lots of hope for next season.

I thank the Liberty organization for access and hospitality all season. I appreciate the time of the coaches and players. We congratulate the organization on a major improvement and I look forward to being back "On the Beat" with the Liberty next season.

That media session can be found at On the Beat With the New York Liberty 09/25/2021. Go to WNBA.com for more info on the Liberty and the league. Check back here for my recurring coverage. 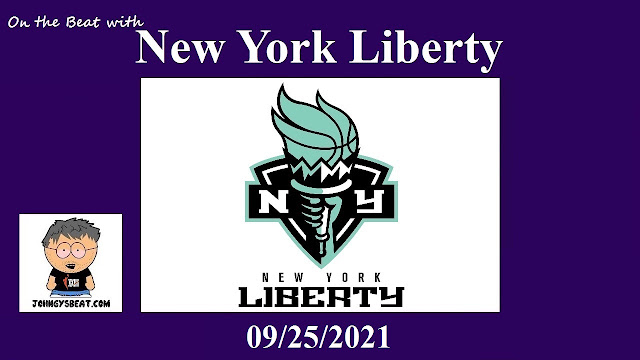