Cards That Never Were is a recurring series in which I create virtual trading cards for players missed in various sets. It is a concept I have borrowed from far too many to list, but I appreciate all of their efforts. Other creations of mine and many others can be found in the Custom Baseball Cards Facebook group (which is not just baseball cards, despite the name).
Merritt Kersey played his college ball at West Chester, before signing with the Philadelphia Eagles before the 1974 season. He played two season with the Eagles, punting 97 times for a 3.5 yard average with no blocks.
For his efforts, Topps gave Kersey a card in the 1975 set, but left him out of the 1976 set. Spike Jones took over for Kersey in the '75 season and got a card in the '76 set. Still, I felt the need to give Kersey a "career capper," especially since I found an action shot of him. 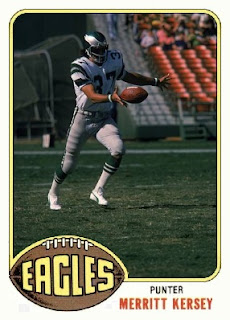