Celebrity Jersey Cards is a weekly series in which I create virtual trading cards for celebrities wearing sports jerseys. Today, the New York Yankees end our season-long alphabetical journey through all Major League Baseball teams. We wrap up our MLB run with a couple (literally) of Yankees. These two class acts almost make me want to like the Yankees.

Playing first base and pitching, Ally Carda was one of the best two way players ever for UCLA, winning consecutive Conference Player of the Year honors. She won a silver medal in the recent Olympics and also played in National Pro Fastpitch and Athletes Unlimited. 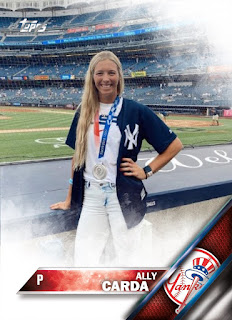 Kelly Kretschman was a four-time All-American at Alabama, a two-time medal winning Olympian and one of the greatest National Pro Fastpitch players ever. Kretschman has done some coaching on the college level and also was a facilitator in Athletes Unlimited this season. 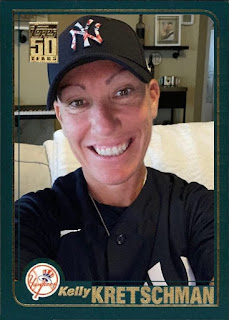 Thanks for all your comments and for stopping by!