Celebrity Jersey Cards is a weekly series in which I create virtual trading cards for celebrities wearing sports jerseys. With my alphabetical romp through MLB finished, I turn my attention to other sports, especially the WNBA, where the Chicago Sky just won their first championship.

Second generation pro basketball player Lexie Brown is the daughter of former NBA player Dee Brown. After a successful career at the University of Maryland, Brown was selected by the Connecticut Sun with the ninth pick in the 2018 WNBA draft. After the 2018 season, she was traded to the Minnesota Lynx for Natisha Hiedeman. She played two seasons with the Lynx and signed with the Sky in 2021 as a free agent. For her career, Brown has averaged 4.8 points per game. Now she is a champion. Lexie sported a Chicago Bears Justin Fields #1 jersey for her Celebrity Jersey Card. 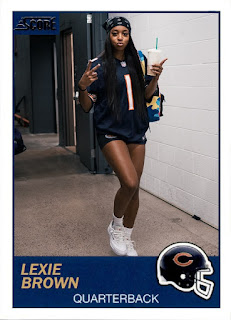 Diamond DeShields is also a second generation athlete. Her father Delino played many years in the MLB. Her brother Delino Jr. has played seven seasons in the MLB. Diamond starred at North Carolin and then Tennessee, before the Sky selected her with the third pick of the 2018 WNBA draft. In her four seasons, she has averaged 13.2 points per game, along with 4.3 rebounds and 2.2 assists. Like fellow champion teammate Lexie Brown, Diamond wore a Bears Justin Fields #1 jersey for her Celebrity Jersey Card. 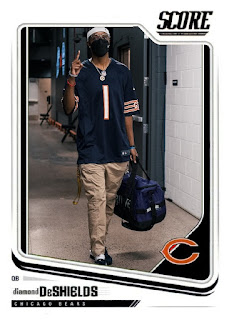