Coach Curt Miller and the WNBA

Coach Miller started his coaching career as an assistant with Cleveland State University in 1991. After a couple other assistant tints, he became a head coach at Bowling Green in 2001. In 2015, he joined the WNBA Los Angeles Sparks as an assistant. He has been Head Coach of the Sun since 2016.

Coach Miller gives great answers in media sessions. I always enjoy listening to his answers. I probably have talked to Coach Miller more than any other WNBA coach.

A lot was lost to the pandemic, but one benefit I had was being able to join media Zoom sessions for all of the teams. I never would have had that chance in regular times.

The Sun had an interesting 2021 season. They had the league's best record at 26-6, but they were upset in the Semi-Finals by eventual champ Chicago Sky. It was a tough series for me, because I obviously cheered for my Sky, but I hated to see the Sun lose.

Check back and GlobalWomensSportsRadio.com here for my recurring coverage. Also, check WNBA.com for all the info and news on the league. 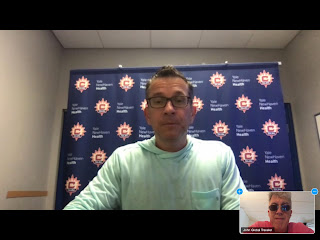