Celebrity Jersey Cards is a weekly series in which I create virtual trading cards for celebrities wearing jerseys. For Swag Week, we featured celebs with swag.

Born in New York, Ed Rendell would go on to become the 45th Governor of Pennsylvania, serving 2003-2011. Prior to that, Rendell was Mayor of Philadelphia 1992-2000. Rendell is a big sports fan, favoring the Eagles, but he has made several fun wagers supporting various Pennsylvania teams. For his Celebrity Jersey card, Rendell wore a #92, perhaps most notably worn by James Harrison. Swag in the form of a Steelers helmet and rag doll also made the card. 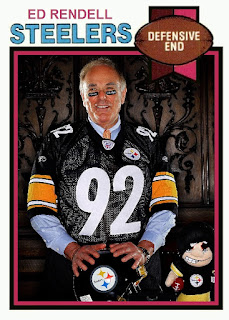 Born in Beverly Hills, California, Stacey Gardner is an actress, model and practicing attorney. She is possibly most known for her stint on tv's Deal Or No Deal, guarding briefcase #2. Punter Darren Bennett is probably the most successful #2 for the Chargers. Gardner's Celebrity Jersey Card also features several other DoND models, as well as their briefcases, in this case classified as swag. 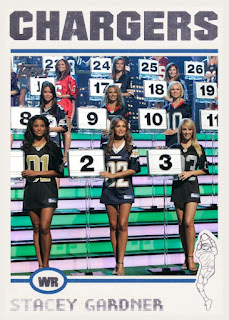