After starring at the University of North Carolina, Sam Perkins was selected by the Dallas Mavericks in the first round of the 1984 NBA draft. He went on to have an excellent 17 year career with the Mavs, Los Angeles Lakers,  Seattle SuperSonics and Indiana Pacers. He was raised a Jehovah's Witness and therefore did not stand for the national anthem during his career. I don't remember that being a big deal back then. Perkins was another of the 12th man flag raisers for the Seahawks, earning his Celebrity Jersey Card while wearing his own jersey and holding a $12 jersey. 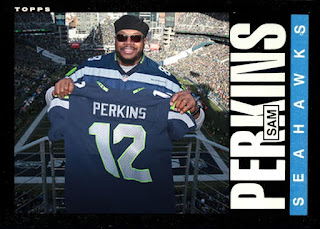 Seattle native Lee "Chip" Hanauer was inducted into the International Motorsports Hall of Fame in 1995 and the International Motorized Vehicles Hall of Fame in 2005. After suffering injuries in accidents, he retired in 1996. He volunteers as a transporter for Disabled American Veterans. Hanauer was another 12th man flag raiser, where he also earned his Celebrity Jersey Card. 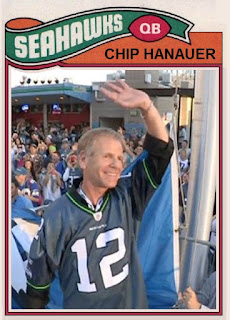