Last week, I had the pleasure of interviewing Coach Brooke Atkinson of the New Mexico State University women's basketball team. Coach Atkinson took time out of her busy schedule to discuss several topics about her career, the Aggies and more. That interview can be found at On the Beat With Coach Brooke Atkinson.

Coach Atkinson spent her playing days at Western Nebraska Community College (1998-00) and Wichita State (2000-02). Shortly after her playing career ended, she started her coaching career as an assistant at NM State in 2003. Eight seasons at NM State were followed by three at the University of South Dakota and three at Colorado State, before Coach Atkinson returned to NM State as the head coach for the 2017-18 season.

Heading into this season, Coach Atkinson had compiled a 65-50 record at NM State. Some highlights include earning WAC Coach of the Year honors in the 2017-18 season, while guiding the Aggies to their first bid to the WNIT since 2010. The following season, the Aggies went 26-7, including a 17-game winning streak, tied for longest in program history.

NM State is 3-2 on this young season. Their last scheduled game Wednesday against UTEP was postponed due to multiple positive COVID-19 tests and contact tracing within the UTEP program. The game will be rescheduled later in the season. Prior to that game, the Aggies blast played Saturday, beating Tennessee Tech 66-52 to improve to 3-2 for the season.

We covered a wide range of topics, starting with when Coach Atkinson knew coaching was in her future. Me moved on to recruiting during the pandemic and in general, including Coach listing some of the strong points of NM State. Coach Atkinson gave her thoughts on the possible NCAA tournament expansion to 68 teams, social media and promoting women's basketball. I ended by asking Coach Atkinson about her favorite activities outside of basketball and when she listed travel as one, I followed by asking her favorite destinations.

I thank Coach Atkinson for her time during the busy season. I wish the Aggies a lot of luck. I hope to do an update interview with Coach Atkinson deeper into the season. 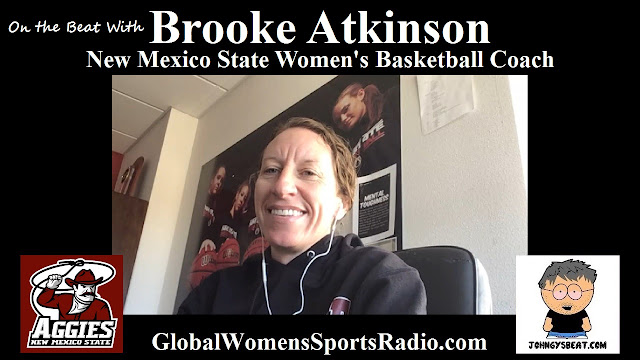