On the Beat With Sam Galanopoulos and the Loyola Ramblers

Last Sunday, I was "On the Beat" for the first time with the Loyola Ramblers women's basketball team. The Ramblers beat the Miami (OH) RedHawks and I met Loyola guard Sam Galanopoulos, niece of my longtime friend Louie Atsaves.

While the Loyola Ramblers men's basketball team has gotten a lot of nation exposure of late, and deservedly so, the women's team has quietly been on the rise. In her sixth season at Loyola, Head Coach Kate Achter has lead the resurgence.

Last season, Achter guided the Ramblers to a berth in the Women's Basketball Invitational, the program's first postseason appearance. Although early in the season, the Ramblers are off to a hot start at 4-2. The latest win was a 69-52 drubbing of Miami (OH).

The game was never really in doubt. Miami only led once, a two point edge 1:36 into the game. After that, it was all Loyola. The Ramblers led 20-10 after one quarter and cruised to the 17 point victory.

Of special interest to me was the play of junior Sam, who led the charge in the first quarter with six points. Sam finished with 11 points, second on the team only to senior forward Allison Day, who had 20. Sam also had two rebounds, four assists and one steal. I had the chance to briefly chat with Sam after the game.

Sam's father Mike was one of my first bosses when I started at Lerner Newspapers in 1987. Mike's future brother-in-law Louie was a part-timer while still in college. One of Sam's aunts, Barb, sister of Louie, was a star player at DePaul in the 1980s. While I have known the Atsaves family for many years and have probably seen Sam at some family events, this was the first time I talked to her.

I really enjoyed my day at Loyola. It's a quick drive and it is extra fun to have a special rooting interest in Sam. I will be returning to Loyola games as often as my schedule allows.

A special thanks to Loyola Director - Athletic Communications J. Ryan Haley for the hospitality. Also thanks to Sam for her time after the game. Check back here for recurring coverage of Loyola Ramblers WBB. 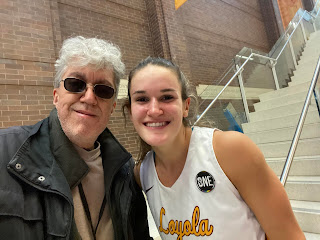