Born in New York, Billy Crystal rose to fame on tv's Soap and Saturday Night Live. He went on to an excellent movie career, including City Slickers, one of my favorites. I don't know the circumstances of him wearing the Dallas Cowboys jersey, but I know he earned a Celebrity Jersey Card for it. The #9 was most notably worn by Tony Romo. 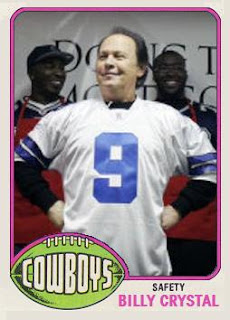 San Diego native Mario Lopez has built quite a career. He was a Saturday morning staple on Saved By the Bell and progressed into hosting and reporting roles on several shows, including his current position on Access Hollywood. For his Celebrity Jersey Card, Lopez and his wife stayed true to his SD roots, donning a Chargers #99 worn most notably by defensive end Raylee Johnson. Unfortunately for Lopez, the Chargers moved back to Los Angeles, staying true to their LA roots. 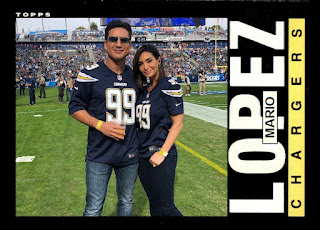