Today kicks off Statues Week, where I feature celebrity statues. To start the week, I have a Special Edition of Celebrity Jersey Cards featuring statues wearing jerseys.

"Mr. Cub" Ernie Banks certainly earned that title. His statue in inscribed with "Let's play two," but originally, the apostrophe in "let's" was left out. It was quickly fixed by the sculptor though. Unveiled in 2008, it is 7 feet tall on a 4 foot granite base. It now stands outside the front gates at Wrigley Field. Though Banks never played in even a playoff game, his statue wore a Cubs jersey during the 2016 run to the World Series. 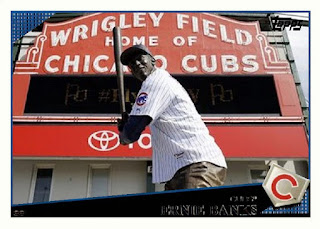 The Harry Caray statue is 12 feet tall in white bronze on top of a granite base. The statue names "And a one, and a two... and a three...,"was unveiled in 1999 and stands outside the centerfield gates at Wrigley Field. A Cubs jersey was placed on it during the 2016 Wolrd Series run, giving me a chance to make a Statues Edition Celebrity Jersey Card for it.

Amazing tribute to a pair of Cubs icons!