Terri Runnels has had a fascinating career in wrestling. She started in World Championship Wrestling as Alexandra York, leader of the York Foundation, a group of wrestlers who used high tech computer info to defeat opponents. She moved to the WWE as Marlena, valet to then-husband Goldust. The cigar-smoking Marlena added a new layer to the intriguing Goldust character. Eventually, Terri assumed her true identity and became a manager for others. The little she-devil even won the Hardcore title once.

Terri has kept a bit of a low profile since leaving wrestling, although she does make appearances at various conventions and events. At the Motor City Comic Con many years ago, Terry started calling me "Jay Leno," a name I heard fairly often those days. This brought frustration to The Honkytonk Man, who was also there and thought he was the first to make that connection. Since then, I have seen Terri many times. She has been kind enough to give me a few interviews, a promo and even wore my shirt.

I will see Terri again Saturday at Great Lakes Championship Wrestling's Golden Days in Cedarburg, WI. It will be a great night of wrestling action, featuring Terri in a pre-show meet-and-greet. Will Terri get involved in any of the wrestling action? Will Terri attempt to mix it up with Linda Kay, the unexpected star of last month's Blizzard Brawl? I don't know, but I will find out while I am "On the Beat" there. I will report back here on all the action.

Go to GLCWWrestling.com for more info on Golden Days and other GLCW events. Check back here for my recurring coverage of GLCW. 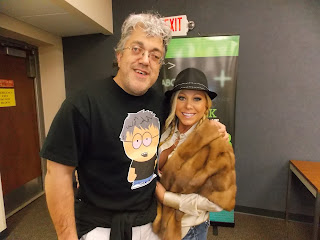