Admittedly, I am biased, but I think Kevin Sullivan is one of the most underrated talents in pro wrestling. As he proved many times, he has a fantastic mind for the business.

Unfortunately, a lot of Sullivan's best work was in Florida, before the internet and cable television, which limited the audience. The most exposure he got was probably during his stints in World Championship Wrestling. I always wanted to see Sullivan or one of his stablemates take down Hulk Hogan, but it wasn't going to happen.

I have had the pleasure of meeting Sullivan a few times, the latest being at the Squared Circle Expo's debut event last May. Also there was my buddy Tony Feddeler, who made a big impression on Sullivan, who loved his tshirt. Sullivan actually asked for a picture with Tony because of that shirt. That interaction was just one of many moments that made the SCE special.

As happy as I was to see Sullivan again, I was also glad to reconnect with Tony. I hadn't seen him since the pandemic shut down everything. We both missed seeing friends at conventions and it was great to finally be back doing just that. I am excited about the upcoming SCE II, which promises to be bigger and better, if that is even possible. 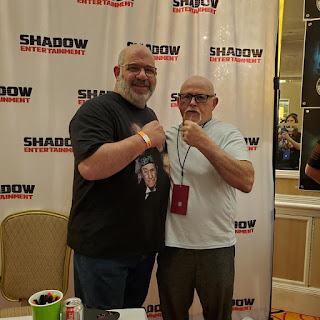